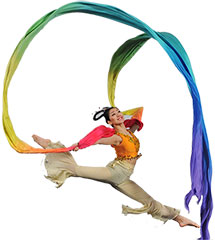 Founded in Silicon Valley, CA, as a nonprofit organization since 1991, Chinese Performing Arts of America (CPAA) is chartered to introduce Chinese culture as an integral part of the American society through performing arts, community services and education; to promote multiculturalism through collaborations with arts organizations from other communities; and to promote global cultural exchange through international cultural events.

CPAA is one of the art troupes in the United States with the artistic resources to produce professional and diverse Chinese performing arts programs on an ongoing basis. In the last two decades. CPAA has served over 20,000 audiences every year in the Bay Area. To expand CPAA’s audience beyond the Bay Area, the company’s flagship production Dances of China – a Journey of 5,000 Years which comprises Dragon King and other CPAA’s original works is on national tours including California, Hawaii, Nevada, Florida, Texas, Idaho, Washington State, New York, Massachusetts, Alaska, British Columbia, and Ontario, winning the standing ovation to establish CPAA an acclaimed arts company at a national level.